National Savings & Investments (NS&I) savings certificates will next year be indexed to inflation measured by CPI instead of RPI. 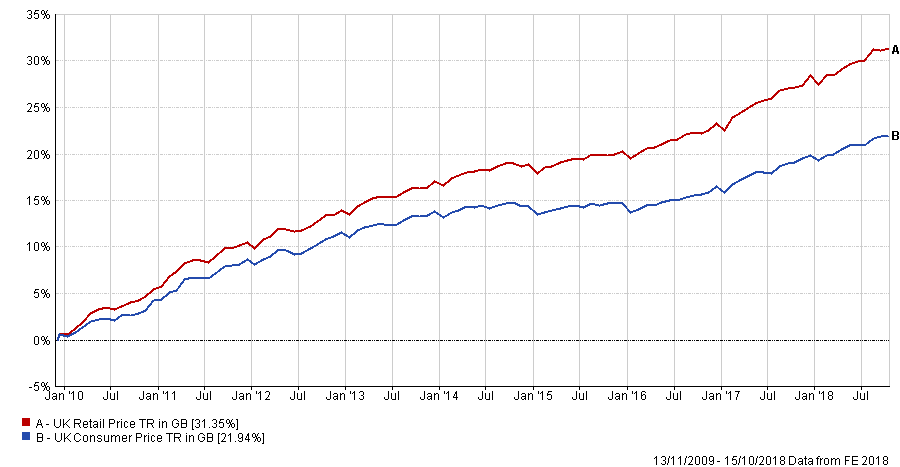 This is a story about the dangers of inflation …

NS&I certificates have not been on sale since 2011, but NS&I allow existing certificate holders to reinvest in new series of certificates when their old ones mature. The terms have gradually worsened over the years and at present reinvestment promises a return of RPI inflation +0.01% a year. For certificates maturing from 1 May 2019, the basis of indexation will change from RPI to CPI.

The change was not picked up by newspapers at the time because they were released the Friday before the 2018 Budget, held on the Monday. Government departments are often accused of burying bad news, and the downgrading of the NS&I index-linked savings certificates is certainly bad news for affected investors.

The government now generally only uses RPI where it benefits, for example as the basis for interest levied on student loans or for annual rail fare increases. CPI is used to index many – but not all – income tax bands and allowances.

NS&I said, ‘This change recognises the reduced use of RPI by successive governments and is in line with NS&I’s need to balance the interests of its savers, the cost to the taxpayer, and the stability of the broader financial services sector.’

As the graph shows, since 2010 RPI has increased far more than CPI. Based on this trend, the effect on investors will be to reduce their returns by around half. In their widely-missed press release, NS&I note that, ‘The cost to the taxpayer is forecast to reduce by £610 million over the next five years’.

That ‘cost to the taxpayer’ could also be read as, ‘return to the investors’.

If you hold any issues of index-linked certificates, think about whether you definitely want to reinvest when they next mature, rather than letting inertia (and automatic reinvestment) take its course.

Inflation is one of those inescapable facts that affect your investment returns. Understanding it, and taking steps to minimise its effects on your money is one of the key ways in which you can generate real wealth from investments.

Talk to us about your investments and pensions and we can help you take steps to beat inflation over the long term. Call us on 020 8559 2111 or email us at enquiries@bbifp.com.